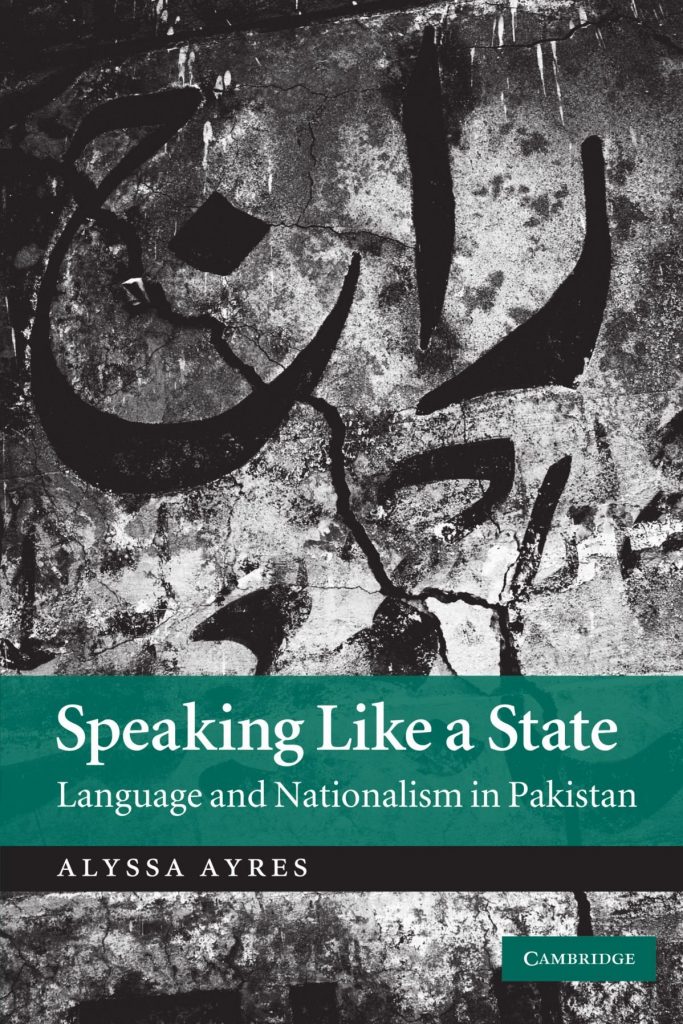 Alyssa Ayres’ fascinating study examines Pakistan’s troubled history by exploring the importance of culture to political legitimacy. Early leaders selected Urdu as the natural symbol of the nation’s great cultural past, but due to its limited base great efforts would be required to make it truly national. This paradox underscores the importance of cultural policies for national identity formation. By comparing Pakistan’s experience with those of India and Indonesia, the author analyzes how their national language policies led to very different outcomes. The lessons of these large multiethnic states offer insights for the understanding of culture, identity, and nationalism throughout the world. The book is aimed at scholars in the fields of history, political theory, and South Asian studies, as well as those interested in the history of culture and nationalism in one of the world’s most complex, and challenging, countries.

• Chronicles Pakistan’s troubled search for identity looking particularly at language and culture • Compares Pakistan’s national language policy and its effects with those of India and Indonesia – the three largest states to emerge from colonial rule • Analyzes political literature of the Punjabiyat movement, not widely discussed in English-language scholarship

1. Articulating a new nation; 2. Urdu and the nation; 3. The nation and its margins; 4. The case of Punjab: elite efforts; 5. The case of Punjab: popular culture; 6. History and local absence; 7. Bringing back the local past; 8. Speaking like a state: language planning; 9. Religion, nation, language; 10. Conclusion.

“….Alyssa Ayres makes three interventions that challenge scholarship in the ﬁeld of postcolonial language politics in general and the study of Pakistan in particular…. Ayres’s engaging and thought provoking study is required reading for historians of South Asia interested in language politics.”
—Javed Majeed, University of London (in American Historical Review, October 2011)

“This book is an incisive, scholarly and eminently clear account of the dilemma that has faced Pakistan…. Anyone interested in Pakistan or questions of nationalism and language planning will find this gripping reading.”
—Elena Bashir, The University of Chicago (in Journal of Sociolinguistics, February 2012)

“Ayres’s book sheds light on an aspect of state planning that has ﬁgured signiﬁcantly in the history of Pakistan, but has not come up for a systematic overview: its language related policies.”
—Naveeda Khan,  Johns Hopkins University (in Journal of Linguistic Anthropology, May 2012)

“The role of language in establishing legitimacy for emerging nation-states is a central concern….Ayres’ concluding contrastive analyses of language policy in India and Indonesia raises intriguing arguments concerning the beneﬁts of applying comparative political analysis to the study of national states and their language ideologies.”
—Julia Major, University of Washington (in India Review, April 2011)

“Alyssa Ayres has written an important and compelling account of the impact and influence of language and culture on one of the twentieth century’s most dramatic stories – the creation of Pakistan as the very first nation born of a religion. She reveals the extraordinary story of the role that language has played in shaping nationalism and culture in modern Pakistan. Dr Ayres is one of our finest experts on the history, culture and politics of South Asia.”
–Nicholas Burns, Professor of the Practice of Diplomacy and International Politics, Harvard University and formerly U.S. Under Secretary of State for Political Affairs

“An important study into the complexities of language and history in Pakistan which offers unique insights into the fragility of Pakistan as a nation. No country in the world is more important to America than Pakistan and this book helps us understand it better.”
–Bruce Riedel, Senior Fellow, Brookings Institution

“Today, when all eyes are focused on Pakistan because of the global geo-political imperatives of fighting the actors who threaten global peace, Alyssa Ayres has provided an insightful analysis of Pakistan’s domestic cultural complexities. By using language policies, linguistic movements and their relationship to the formation of a national identity, Ayres brings cultural issues and trends squarely into the discourse of national polity. This is a rare feat that is desperately needed to better understand our current realities oscillating among global, national, and cultural identities.”
–Vishakha N. Desai, President, Asia Society

“…a finely constructed analytical treatise….brilliantly deployed…offers some real and unique insights into the complex interplay of language, religion and nation-building in Pakistan that are sure to stand the test of time….Ayres’s illuminating study of the contradictory role played by language in the creation of national identity…breaks new ground by showing how the relationship between language and nationalism in Pakistan was deeply compromised by earlier cultural conflicts during the colonial period….in a marvellously rich and counter-intuitive analysis of a burgeoning language movement in Punjab—the acknowledged ‘hegemon’ in Pakistan—Ayres demonstrates that appeals to cultural symbols such as language cannot, in fact, always be dismissed as mere ‘epiphenomenal developments’.”
–Farzana Shaikh, Chatham House (in International Affairs, March 2010)

“…Alyssa Ayres’s 217-page book is a masterful exposition…[her] study on the role of language and nationalism in Pakistan is of crucial importance, particularly in the current context of the growth of radical Islamic extremism in Pakistan. Ayres’s study is compelling and definitive. It is a must read for all those who wish to understand the complexities involved in architecting the nation and/or the idea of Pakistan.”
-Rekha Chakravarthi, Institute of Peace and Conflict Studies (in The Book Review, February 2010)