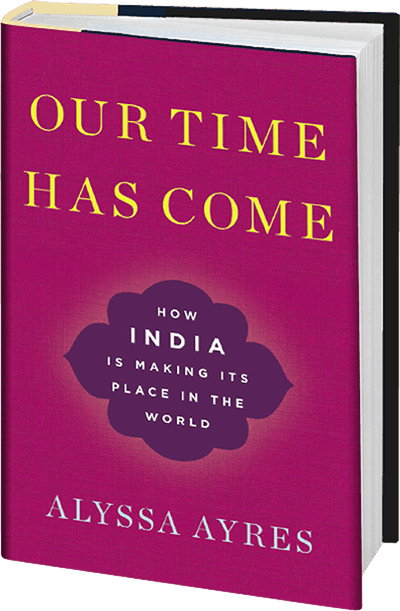 Over the last 25 years, India’s explosive economic growth has vaulted it into the ranks of the world’s emerging major powers. Long plagued by endemic poverty, until the 1990s the Indian economy was also hamstrung by a burdensome regulatory regime that limited its ability to compete on a global scale. Since then, however, the Indian government has gradually opened up the economy and the results have been stunning. India’s middle class has grown by leaps and bounds, and the country’s sheer scale-its huge population and $2 trillion economy-means its actions will have a major global impact. From world trade to climate change to democratization, India now matters.

While it is clearly on the path to becoming a great power, India has not abandoned all of its past policies: its economy remains relatively protectionist, and it still struggles with the legacy of its longstanding foreign policy doctrine of non-alignment. India’s vibrant democracy encompasses a vast array of parties who champion dizzyingly disparate policies. And India isn’t easily swayed by foreign influence; the country carefully guards its autonomy, in part because of its colonial past. For all of these reasons, India tends to move cautiously and deliberately in the international sphere.
In Our Time Has Come Alyssa Ayres looks at how the tension between India’s inward-focused past and its ongoing integration into the global economy will shape its trajectory. Today, Indian leaders increasingly want to see their country feature in the ranks of the world’s great powers-in fact, as a ” and its vastness, history, and diversity render it incomparable to any other major democratic power. By focusing on how India’s unique perspective shapes its approach to global affairs, Our Time Has Come will help the world make sense of India’s rise.

“A chastened India is now deep into a seemingly unstoppable quest for great-power status. In ‘Our Time Has Come,’ Alyssa Ayres, a former U.S. deputy assistant secretary of state for South Asia and currently a senior fellow at the Council on Foreign Relations, describes this astonishing transformation and parses skillfully the political revolution that has accompanied it….lucid and erudite….Ms. Ayres draws a portrait of India in 2040…that takes the breath away.” – The Wall Street Journal

“A sweeping analysis of India’s remarkable recent transformation into one of the world’s biggest economies and militaries….[Ayres] ably charts the country’s emergence from the straitjacket of socialist policies.” – Foreign Policy

“Our Time Has Come provides a fascinating and timely account of a nation growing ‘less and less reticent about its global ambitions.'” – Financial Times

“Our Time Has Come is a highly readable, acute and thoughtful book.” – International Affairs

“The book…all comes together for an absorbing read as Ayres blends her unique perspective of affection and deep faith in India’s success with an analytical outsider’s lens on where India is headed.” – The Hindu

“For a balanced and carefully researched analysis of India’s prospects, as seen from Washington, this is a book which will rank pretty high in the years to come.” –The Print

“Ayres…covers the territory on this theme very well….India could do with more such understanding friends in the US.” – Open magazine

“Ayres’ latest book is primarily aimed at acquainting American readers with Asia’s third-largest economy. But it is also a must-read for Indians and others interested in how this country is making its place in the modern world and how the process is viewed by an astute India-watcher.” – Asian Age

“It is a brilliantly researched, academically robust and yet easy-to-read book on contemporary India…I could not put down the book and will argue that it only adds to the author’s reputation as one of the most perceptive international analysts of contemporary Indian and South Asian geopolitics.” – The Print

“Ayres has written a lucid and compelling book about India’s aspirations and its rise on the international stage that confirms her as one of the pre-eminent international observers of the country. Her expertise, moreover, is not of a sedentary variety: Ayres has taken pains to discover India intimately, and every page of Our Time Has Come exhibits her deep learning.” –  The National

“Ayres…does not brush India’s challenges under the carpet. To the contrary, she undertakes a holistic appraisal of India’s capabilities by situating its myriad challenges alongside its growing material capabilities since the economic liberalization of the early 1990s…Even India scholars will end up with a better handle on the ‘duality’ of the Indian state.” – Lekh

“Alyssa Ayres has blended a keen sense of the possibilities with a clear-eyed grasp of the complexities to produce the most cogent and compelling account to date of India’s emergence on the world stage. She gives her readers easy access to her perspectives as scholar and policymaker, without shying away from the hard questions. Our Time Has Come is a tremendous piece of work.” – Jake Sullivan, Martin R. Flug Visiting Lecturer, Yale Law School; former Deputy Chief of Staff to Secretary of State Hillary Clinton; former National Security Advisor to Vice President Joe Biden

“Alyssa Ayres has emerged as the country’s leading scholar and practitioner on India, and this well-crafted book reaffirms her status. She skillfully captures the moment we are witnessing…India emerging as a leading power…in this exceptionally interesting and important account of the country to watch in the twenty-first century.” – Rich Verma, U.S. Ambassador to India, 2015 to 2017; Vice Chairman, The Asia Group

“The great questions India faces have the potential to significantly alter the global economic and political landscape. Alyssa Ayres brings decades of local knowledge and global foreign policy work as she provides an in-depth view on the complexities of India as it seeks to answer such questions and seize its opportunity.” – Charles R. Kaye, Co-CEO, Warburg Pincus

“Our Time Has Come is a splendid survey of the possibilities, problems, and prospects associated with India’s ascendancy on the global stage. In describing how India is transforming the global order without revisionism, Alyssa Ayres lays bare the uniqueness of India’s rise and compellingly argues for a strong U.S. partnership with India to strengthen the liberal international order.” – Ashley Tellis, Tata Chair for Strategic Affairs, Carnegie Endowment for International Peace