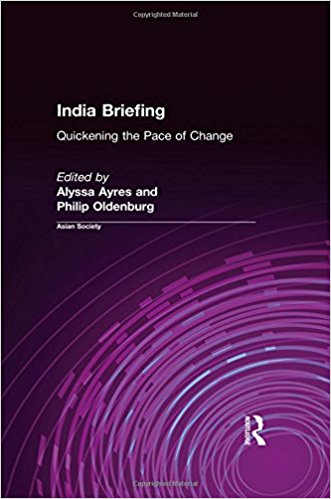 Co-edited with Philip Oldenburg
Asia Society and ME Sharpe, 2002

Since 1998, India has held two national elections, begun the second phase of economic reforms, and grown in global stature as the intellectual training ground for Silicon Valley. With their new prominence, Indian Americans are increasingly effecting change in India through their financial and intellectual clout. In another sphere, India now occupies a special place in the literary world as Indian writers in English gain in prominence and numbers. India has also found itself the new ground zero of the next AIDS crisis. And reciprical state visits by President Clinton and India’s Prime Minister Vajpayee have ushered in a new spirit of Indo-U.S. cooperation.

This edition of India Briefing covers these most recent political, economic, social, and cultural developments in India from 1998 through the end of 2000.

“This lucid volume explores the diverse complexities of [the] new and dynamic India. … An easy to use, up-to-date reference volume on most aspects of Indian life.”
Foreign Affairs

“… an excellent resource for anyone with more than a passing interest in India. The contributors are knowlegeable and thorough in their specialties, and the book is packed with detail on the chosen topics.”
Foreign Service Journal

“… a useful addition to the series and will be useful to South Asianists and practitioners.”
Choice

“… a very useful addition to the increasing number of books on the changing political economy of the Indian State. … valuable in understanding the genesis of an emerging India as the country grapples with the newer challenges and opportunities of the twenty-first century.”
Contemporary South Asia 12(3)